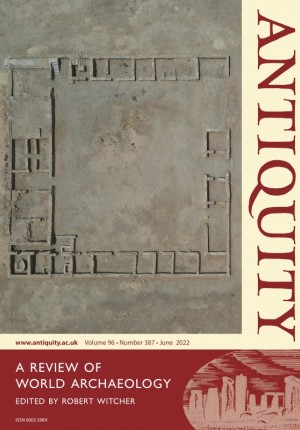 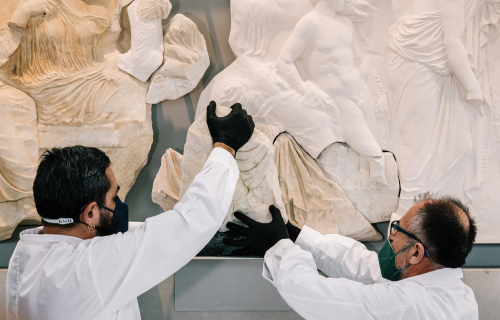 The remarkable archaeological record of Neolithic Orkney has ensured that these islands play a prominent role in narratives of European late prehistory, yet knowledge of the subsequent Bronze Age is comparatively poor. The Bronze Age settlement and cemetery at the Links of Noltland, on the island of Westray, offers new evidence, including aDNA, that points to a substantial population replacement between the Late Neolithic and Bronze Age. Focusing on funerary practice, the authors argue for interconnecting identities centred on household and community, patrilocality and inheritance. The findings prompt a reconsideration of the Orcadian Bronze Age, with wider implications for population movement and the uptake of cultural innovations more widely across prehistoric north-western Europe.

Stable isotope analyses demonstrate that C4 plants played an important dietary role in Eurasian prehistory. Uncertainty remains, however, about when and how crops were integrated into the diet of Central Asian populations. Here, the authors present δ13C and δ15N stable isotope analysis of human and animal bone collagen from Kyrgyzstan, revealing C4 plant—likely broomcorn millet—consumption in the third millennium BC. Combining this evidence with AMS radiocarbon dating and animal collagen peptide fingerprinting demonstrates that broomcorn millet was consumed by humans and animals during the earliest episodes of the westward spread of this crop plant. The results contribute to debates about the timing and means by which domesticated millets were dispersed across Eurasia.

The Neo-Assyrian Empire of the early first millennium BC ruled over the ancient Near East. South-eastern Anatolia was controlled through vassal city-states and provincial structures. Assyrian governors and local elites expressed their power through elements of Assyrian courtly style. Here, the authors report a rare processional panel recently discovered at Başbük in south-eastern Turkey. Incised on the rock wall of a subterranean complex, the panel features eight deities, three with associated Aramaic inscriptions. The iconographic details and Syro-Anatolian religious themes illustrate the adaptation of Neo-Assyrian art in a provincial context. The panel, which appears to have been left unfinished, is the earliest-known regional attestation of Atargatis, the principal goddess of Syria c. 300 BC–AD 200.

Long-distance trade routes criss-crossed ancient Africa and Eurasia. Archaeological research has focused on the commodities in transit and the excavation of major centres located along these routes, with less attention paid to smaller caravanserai and evidence such as rubbish middens. The ‘Incense Route’ linked the Arabian Peninsula and Red Sea to the Mediterranean Sea, with activity peaking during the Nabataean and Roman periods. The authors present the results of test-pit excavations of middens at three small Nabataean–Roman desert caravanserai along the ‘Incense Route’. The assemblages recovered include material culture attesting to wide, inter-regional connections, combined with archaeobotanical and zooarchaeological data illuminating the subsistence basis of the caravan trade.

During the mid-first millennium AD, new kingdoms and states emerged across South Asia. At this time, land grants made to Hindu temples are thought to have led to wide-ranging societal transformations. To date, however, neither the land-grant charters nor the changes they are said to have driven have been studied archaeologically. Here, the authors present the results of the first archaeological investigation of the charters and their landscape context. Bringing together the textual record with a survey of 268 religious and residential sites, the results establish historical baselines against which the longue durée developments of South Asian social, political and economic formation can be profitably re-posed.

Archaeological studies of Early Islamic communities in Central Asia have focused on lowland urban communities. Here, the authors report on recent geophysical survey and excavation of an Early Islamic cemetery at Tashbulak in south-eastern Uzbekistan. AMS dating places the establishment of the cemetery in the mid-eighth century AD, making it one of the earliest Islamic burial grounds documented in Central Asia. Burials at Tashbulak conform to Islamic prescriptions for grave form and body deposition. The consistency in ritual suggests the existence of a funerary community of practice, challenging narratives of Islamic conversion in peripheral areas as a process of slow diffusion and emphasising the importance of archaeological approaches for documenting the diversity of Early Islamic communities.

Processual models of the early state envisioned hierarchical societies with stable social and political structures. More recent research, however, has questioned this vision. Here, the authors explore Middle Horizon (AD 700–1000) Wari state iconography to provide an example of early state social and political organisation from the Central Andes. Social network analysis (SNA) of human figures (‘agents’) depicted in Wari art identifies links between individual agents, as visualised on objects and between the objects’ findspots. The results suggest that the Wari state was more heterarchical than previously imagined. Similar applications of SNA could be used to explore the iconographic evidence of other early, pre-literate states around the world.

Since 1979, when the first cave art was documented in North America, dozens of other examples have come to light. Among these, 19th Unnamed Cave in Alabama contains hundreds of pre-contact Native American mud glyph drawings. In 2017, 3D modelling of the glyphs was initiated, ultimately enabling digital manipulation of the chamber space and revealing images that could not be perceived prior to modelling. Most surprisingly, the cave's ceiling features very large anthropomorphic glyphs that are not apparent in situ due to the tight confines of the cave. We argue that photogrammetry offers untapped potential for not simply the documentation but also the discovery of a variety of archaeological phenomena.

Over the past 25 years, CORONA satellite imagery has become an integral part of archaeological research, especially for arid, sparsely vegetated regions such as the Middle East. Since 2020, a new archive of satellite imagery gathered by the US spy satellite programme that succeeded CORONA—HEXAGON—has become widely available for download via the United States Geological Survey. This photographic archive has enormous potential for archaeological research. Here, the authors seek to lower the barriers to accessing and using this imagery by detailing the background, technical specifications and history of the HEXAGON archive. Four case studies illustrate the benefits and limitations of HEXAGON imagery for archaeological and historical research in the Middle East and beyond.

How often, and in what contexts, have archaeologists discussed racism over the last four decades? Do societal events lead to sustained discussions of racism among the academic community? Here, the authors seek to answer these questions by applying computational text analysis methods to 68176 abstracts from 41 meetings of the Society for American Archaeology. Discussions of racism are found to be rare—usually a passing mention in the context of broader social issues. Historical archaeologists have addressed racism more frequently than other archaeologists. The results form a baseline against which the discipline's engagement with racism as a research theme and with anti-racist strategies might be tracked.

The World of Stonehenge exhibition: Britain and Europe from 4000–1000 BC
Chris Scarre
View abstract

The World of Stonehenge is the latest in a series of impressive exhibitions at the British Museum devoted to European prehistory: a worthy successor to Ice Age Art in 2012 and Celts: art and identity in 2015. Like them, it has already attracted significant public attention, with a raft of positive reviews in the press. Indeed, given the quality and range of material on display, it could hardly fail to be a success. Not only does it gather together key objects from a series of British and Irish museums, but also a range of striking artefacts from continental Europe. Among these, first place must surely go to the Nebra ‘sky disc’; but there are also major finds from France, Switzerland, Denmark and northern Italy that will not previously have been seen in Britain.

This review considers two books outlining the results of a major big-data project in England that sought to make sense of the growing amount of information from developer-funded archaeology, the reporting of finds to the Portable Antiquities Scheme, and from a wide range of other databases. The result is fascinating and thought-provoking discussions of how we could interpret regional variation in archaeological data, although methodological issues present an interesting case study of the challenges that big-data projects face. The publication strategy—of two separate volumes—also raises questions about how we should disseminate the results of large-scale research programmes.

Large, conglomerate caves in north-eastern Iberia have been significant places since the Neolithic through to historical times; however, their significance during the Palaeolithic has barely been explored. This project is the first systematic study of the use of these iconic geological landmarks among Pleistocene hunter-gatherers.

Hunting in the desert: assessing the form and use of kite-like structures in the western Sahara
Olivier Barge, Laetitia Balaresque, Jean-Loup Baudoin, Manfred Boelke and Lison Derrien
View abstract

Nearly 500 kite-like structures have recently been discovered in the western Sahara using high resolution satellite images. Although four distinct types with different morphologies have been distinguished, their characteristics, topographical location and orientation in the landscape indicate that they are all most likely hunting traps.

South-eastern Iran flourished during the Bronze Age and several important settlements from this period have been excavated. Few contemporaneous cemeteries, however, have been investigated. Excavations at Bampur 14 have revealed 10 graves dating from the late fourth to early second millennium BC. Finds include a copper-bronze seal and a stone column, demonstrating connections with north-eastern Iran and Central Asia.

The microscopic analysis of tool marks on objects from the Late Bronze Age ‘shaman's grave’ at Przeczyce, Poland, has demonstrated that two wild boar tusk pendants, a bone disc and a set of bone tubes were manufactured exclusively using metal tools. We argue that the tubes were a musical instrument that originally consisted of several separate pieces, rather than a pan flute, as has previously been suggested.

This study presents preliminary discoveries from Sding Chung cave, an early multi-burial cave site in the Himalayan highlands dating from 300BC–AD 300. Multiple human and animal bones within the cave provide unique evidence for understanding the diverse mortuary rituals and biocultural adaptations in this region.

Three seasons of archaeological fieldwork by the Avdat in Late Antiquity Project have yielded new evidence of intensive Early Islamic activity in the late antique town of Avdat in Israel's Negev Highlands. This evidence has important implications for understanding the fate of such towns in the region during the Byzantine–Islamic transition.