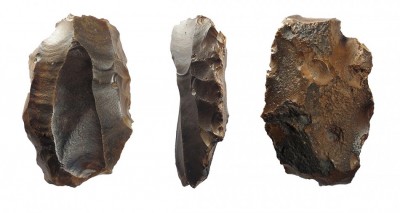 Since 2012, the French Mission in Oman has discovered several Palaeolithic sites in the south-eastern foothills of the Sufrat Dishshah (a hill of the Sufrat Valley/Wādī al-Сufrāt), in the Adam region of north-central Oman. These sites are attributed to the Lower through to the Late Palaeolithic (Bonilauri et al. 2015). The 2016 field season was dedicated to further investigation of the previously identified sites of the Sufrat Dishshah area. A number of additional artefacts were located and studied on site; four artefacts—two bifaces and two Nubian cores—were retained for further study. These finds have particular importance for the understanding of Middle Palaeolithic variability and cultural diffusion in Oman, and they represent one of the most significant results of the 2016 Adam expedition.

First published in:
Issue 356, Volume 91
Other Project Gallery articles from this issue:
Harvest time: crop-reaping technologies and the Neolithisation of the Central Mediterranean
Investigating the provenance of obsidian from Neolithic and Chalcolithic sites in Bulgaria
Archaeometric analysis of ceramic production and exchange from the Neolithic to the Gallo-Roman period in Brittany, France
The lost fortress of Onoguris? Newly discovered sixth-century AD fortifications at Khuntsistsikhe, western Georgia
Investigating the proposed sanctuary near the volcanic Lago di Venere, Pantelleria, Italy, in 2014 and 2015
Art and archaeology: the visualisation of Orkney
Search the Project Gallery