An Acheulean biface from the Deh Luran Plain, Iran 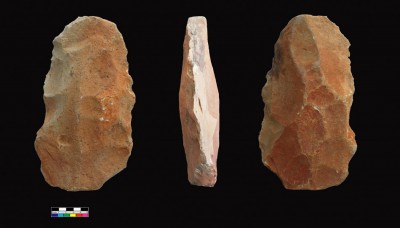 In 1960, Robert Braidwood discovered, by chance, an Acheulean biface at Gakia, Kermanshah Province, in the Zagros Mountains of western Iran (Braidwood 1960). Since then, only around ten Lower Palaeolithic sites have been identified on the Iranian Plateau, most of which are open-air sites (see Biglari & Shidrang 2006). Despite growing interest in the Palaeolithic of Iran over the past decade, studies generally continue to focus on particular sites and are largely concerned with the technology and typology of raw materials. A major problem for studies of the Lower Palaeolithic, in particular, is the rarity of cave sites, making it very difficult to study the behaviour of the early hominids through excavation. This paper reports the discovery of an Acheulean biface during a survey of the Deh Luran Plain to the south of the plateau, adding to the picture of human dispersal during the Pleistocene.

First published in:
Issue 357, Volume 91
Other Project Gallery articles from this issue:
On the Late Pliocene stone tools of the Quranwala Zone, north-west sub-Himalayas, India
Recent investigations of the early prehistory of the Wainganga River basin, eastern Maharashtra, India
Drenovac: a Neolithic settlement in the Middle Morava Valley, Serbia
Discovery of obsidian mines on Mount Chikiani in the Lesser Caucasus of Georgia
El Pacífico: early architecture and landscape during the Formative period of the Central Andes
A prehistoric pyramid in the shape of a volcanic cinder cone, Nepeña Vallery, Peru
Newly discovered rock art sites in Balandar, Mashhad province, north-eastern Iran
The discovery of an ancient Maya causeway system in the southern Maya Mountains of Belize
Search the Project Gallery