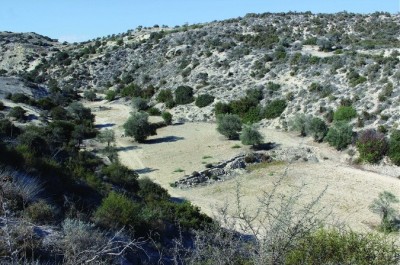 The narrative of socio-political development on the semi-arid island of Cyprus during the early first millennium BC (c. 1100–500) has focused largely on the institutions, practices and material culture of major centres and their interrelationships with growing maritime networks. Less studied are the landscapes surrounding these coastal and inland towns, which helped condition the increasing wealth and power of authorities through the management of agropastoral and metal goods, and through the creation of new mortuary, ritual and community spaces (Iacovou 2014). These regional contexts, whose settlements and land-use practices have now been recorded through several survey projects, provide a rich yet under-used source of material for investigating social transformations during this period. Ongoing interdisciplinary work in the Vasilikos and Maroni Valleys of south-central Cyprus has begun systematic analysis of these landscape changes and their long-term contexts. The project is focused on a 150km2 research area situated 20km east of the ancient polity of Amathus, extending from the central Troodos massif down to the coast.

First published in:
Issue 353, Volume 90
Other Project Gallery articles from this issue:
New Palaeolithic and Mesolithic sites in the eastern Aegean: the Karaburun Archaeological Survey Project
New investigations at the Middle Stone Age site of Pockenbank Rockshelter, Namibia
A fifth-millennium BC cemetery in the north Persian Gulf: the Zohreh Prehistoric Project
Seeds of collapse? Reconstructing the ancient agricultural economy at Shivta in the Negev
Search the Project Gallery

Cite this article
Catherine Kearns. 2016. Re-survey and spatial analysis of landscape developments during the first millennium BC on Cyprus. Antiquity Project Gallery 90(353): http://www.antiquity.ac.uk/projgall/kearns353