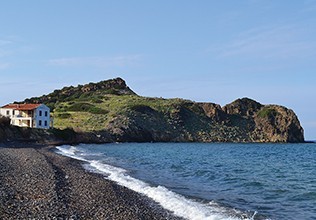 Despite ongoing fieldwork focusing on the Palaeolithic and Mesolithic periods of the Aegean, the eastern part of this region, especially western Turkey, remains almost entirely unexplored in terms of early prehistory. There is virtually no evidence from this area that can contribute to broader research themes such as the dispersal of early hominins, the distribution of Early Holocene foragers and early forager-farmer interactions. The primary aim of the Karaburun Archaeological Survey Project is to address this situation by collecting data from the eastern side of the Aegean Sea, thereby contributing to the currently debated issues of Aegean and Eastern Mediterranean prehistory.

First published in:
Issue 353, Volume 90
Other Project Gallery articles from this issue:
New investigations at the Middle Stone Age site of Pockenbank Rockshelter, Namibia
A fifth-millennium BC cemetery in the north Persian Gulf: the Zohreh Prehistoric Project
Re-survey and spatial analysis of landscape developments during the first millennium BC on Cyprus
Seeds of collapse? Reconstructing the ancient agricultural economy at Shivta in the Negev
Search the Project Gallery