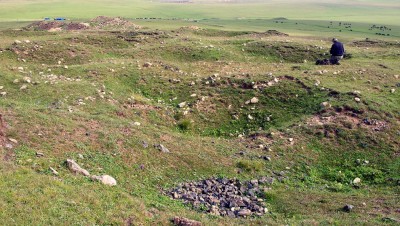 The volcanic Javaketi Range (Lesser Caucasus, Georgia) has recently aroused the interest of both geologists and archaeologists on account of its rich environmental and geological history, the prehistoric exploitation of its raw materials and the discovery of archaeological sites ranging from the Palaeolithic to the Historical Ages (Gogadze 1980; Kikodze 1983). In 2012 and 2014, two systematic surveys were conducted on Mount Chikiani (Koyundağ) with the aim of defining the areas from which obsidian was obtained during different prehistoric periods, and to characterise its sources (Biagi & Gratuze 2016). A longer season of archaeological prospection was carried out in 2016. Among the many important finds was the discovery of a large number of obsidian mining pits along the northern and north-eastern lower slopes of the volcano (Figure 1), as well as several obsidian workshops. During the 2016 season, research focused on the 2417m-high trachyrhyolitic dome—a source of high-quality obsidian—emerging from the plain around 300m north-east of Lake Paravani.

First published in:
Issue 357, Volume 91
Other Project Gallery articles from this issue:
On the Late Pliocene stone tools of the Quranwala Zone, north-west sub-Himalayas, India
An Acheulean biface from the Deh Luran Plain, Iran
Recent investigations of the early prehistory of the Wainganga River basin, eastern Maharashtra, India
Drenovac: a Neolithic settlement in the Middle Morava Valley, Serbia
El Pacífico: early architecture and landscape during the Formative period of the Central Andes
A prehistoric pyramid in the shape of a volcanic cinder cone, Nepeña Vallery, Peru
Newly discovered rock art sites in Balandar, Mashhad province, north-eastern Iran
The discovery of an ancient Maya causeway system in the southern Maya Mountains of Belize
Search the Project Gallery