A prehistoric pyramid in the shape of a volcanic cinder cone, Nepeña Vallery, Peru 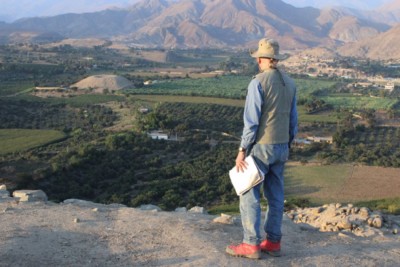 Archaeological work in the 1960s in the middle Nepeña Valley of coastal Peru (Figure 1) identified an artificial earthen mound or pyramid, approximately 15.5m high, with what was interpreted to be a crater dug into the top (Proulx 1968). This site has been variously known as Wanka, Huaca de Muro and El Bocón (PV31-55 in the Peruvian Ministry of Culture files). When viewed from a distance (Figure 2), the site resembles a volcanic cinder cone, such as the one in the Andahua Valley in southern Peru (Figure 3), and we have therefore named the site El Volcán. It should be noted, however, that there are no volcanoes in the vicinity of El Volcán to serve as models, nor indeed are any other examples of volcano-shaped structures known from Peru or elsewhere.

First published in:
Issue 357, Volume 91
Other Project Gallery articles from this issue:
On the Late Pliocene stone tools of the Quranwala Zone, north-west sub-Himalayas, India
An Acheulean biface from the Deh Luran Plain, Iran
Recent investigations of the early prehistory of the Wainganga River basin, eastern Maharashtra, India
Drenovac: a Neolithic settlement in the Middle Morava Valley, Serbia
Discovery of obsidian mines on Mount Chikiani in the Lesser Caucasus of Georgia
El Pacífico: early architecture and landscape during the Formative period of the Central Andes
Newly discovered rock art sites in Balandar, Mashhad province, north-eastern Iran
The discovery of an ancient Maya causeway system in the southern Maya Mountains of Belize
Search the Project Gallery